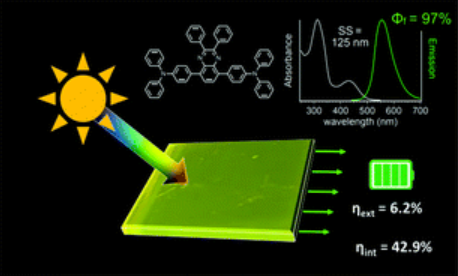 Luminescent solar concentrators (LSCs) are devices designed to efficiently collect both direct and diffuse solar radiation and concentrate it on photovoltaic cells to foster their use in building-integrated photovoltaics (BIPV). The optimization of LSC performances involves the adjustment of both the fluorophore and the guest polymer matrix. On this account, we investigated a series of high quantum yield, donor–acceptor–donor (D–A–D) photostable fluorophores (DQ1–5), presenting a central quinoxalinic acceptor core, not previously employed in LSCs, and triarylamines or phenothiazine as donor groups. The molecules were also decorated with alkyl chains on the central core and/or the donor groups, to explore their compatibility with the poly(methyl methacrylate) (PMMA) and poly(cyclohexyl methacrylate) (PCMA) matrices utilized in this study. The PMMA and PCMA films (25 μm thick), containing 0.2–2.2 wt% of DQ1–5, absorbed in the 370–550 nm range and presented emission maxima at 550–600 nm, with fluorescence quantum yields higher than 40% even at the highest doping contents. Notably, the DQ1/PMMA thin-films showed enhanced phase compatibility and excellent quantum yields, i.e., >95%. Accordingly, they were designed to obtain 25 cm2 area LSCs with remarkable internal (ηint) and external (ηext) photon efficiencies of 42.9% and 6.2%, respectively, higher than those observed from state-of-the-art devices based on the Lumogen Red 305 (LR305) as the reference fluorophore. Overall, these were the best results ever achieved in our laboratory for thin-film LSCs built with organic fluorescent emitters. 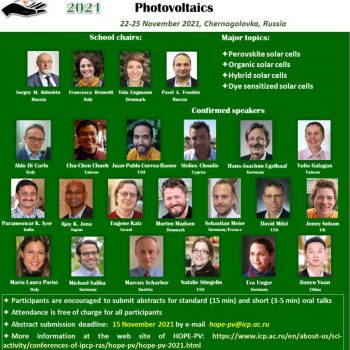